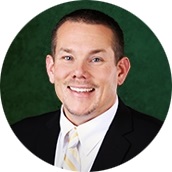 Ryan M. Williams is a second generation financial adviser. Ryan began obtaining his securities and insurance licenses shortly after entering the industry back in 2005.  He firmly believes in establishing a relationship with a client and meeting them where they are financially to provide them with the best products and choices to help them attain their goals.  He and his dedicated team are passionate about guiding his clients to achieve their vision of financial success.  Ryan believes great things are accomplished through sound relationships built on trust and integrity.  He works very hard to exemplify these values in everything he does, both professionally and personally.

Outside of the office Ryan enjoys spending time with his family which includes his wife Jenny whom he has been married to since 2003. Together, they are the parents to three children: daughter, Kendralyn (2010), son, Cooper (2013), and daughter, Kambry (2017). In his free time Ryan enjoys being outdoors working on his property and camping with his family and friends. Ryan also volunteers his time throughout the year with many different organizations and local events.